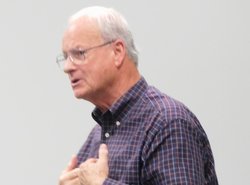 The Jack Fahey Giving Back Scholarship is open for application by BIS students.  This scholarship will be applied to student's Spring 2018 account.

To be eligible students must meet these requirements:

Applicants must complete the online application and submit an essay.

Karole McKalip is a Mason alumna from the College of Education, former GMU Director of Academic Advising and BIS Academic Advisor. She and her husband, Diehl McKalip, made it possible in 2004 to create a BIS Scholarship Endowment Fund. This fund provides $1000 in scholarship awards to BIS students each year.

Karole graduated in 1981 with a Master of Education Degree in Counseling and Development. She worked part-time as an advisor in the Department of Academic Advising while doing her graduate work. In 1985, she began working full-time and became the Assistant Director in the Academic Advising and Orientation program office. Two years later, she became Director of Academic Advising and Orientation and served as Director until 1997 when she retired.
Shortly after “retiring,” Karole came back to Mason and joined the BIS department as a part-time academic advisor. She was very interested in working with adult students whom she found to be extremely committed and dedicated to finishing their degrees. She enjoyed working with the BIS staff and believed BIS was a strong academic program, often a “breeding ground” for new majors such as the MA in Telecommunications. Karole states that the BIS program is “cutting edge” not only for the creation of new majors but for new ways to pursue degree completion.  Following her retirement as an academic advisor for the BIS program in 2002, Karole contacted the Development Office at Mason regarding the possibility of a BIS scholarship from donations made by students and alumni. She was told there was not enough money to sustain a yearly scholarship. It was at this time that she and her husband donated the money necessary to create a scholarship endowment fund. Since 2004, a yearly BIS scholarship has been awarded. Since 2004, Karole and her husband have continued to contribute to the fund as well as to the Mason library.
We extend a hearty thanks to both Karole and Deihl McKalip for their service and generosity!